Tonbridge parkrun … at which I finally earned my place in the Cowell Club.

I didn’t oversleep my alarm*, my car did not break down, I did not get stuck in traffic, I did not forget my barcode and I did not lose a foot or break an ankle on the way round.

All of which means that I clocked up a parkrun at my 100th different venue and finally earned my place in the Cowell Club.  I’m still grinning.

I arrived disgustingly early, and would have had no trouble finding a place in the free Rugby Club car park… had I read the course page and realised that it existed.  Instead, I parked in the pay and display next door before making my way through the puddles to the start.

As is usual at an inaugural, there were lots of familiar touring faces, including James and Teresa (who I met a few weeks ago at the Ashford inaugural), Katie and Trish (who I met last week at Aylesbury), the Burnham Joggers, Running Dan Houghton, Nicola, Steven, Becky, David, Rosemary and King Danny.  But the best surprise of all was seeing Zoe and Stephen Wright, who had promised to be there in spirit but who, in the end, were there in body too.

The course is another crumpled lollipop, though unlike Aylesbury, you only get one lick (thank you, Danny, for the phrase).  It’s run on a mixture of grass**, tarmac and trail and has a number of narrow sections on which you ignore the marshals’ “Keep Left” instructions at your peril.  If you’re after a PB, then you’ll need to start at the front of the pack, because there’s a bottle neck about 200m in, but once you’re through that, it’s pretty much plain sailing.

The finish is by the clubhouse, which has all the facilities you need: toilets, tea, coffee, hot chocolate and plenty of space in which to stand around and chat.  Just do the ED a favour and take your shoes off as you go in to keep the mud levels down to a minimum.

All in all, a lovely way to bring up my touring 100.  Did I mention that I’m still grinning?

*Though it was close.  I didn’t hear it, but fortunately for me, if not for him, my husband did.  And I did forget my Garmin, so my run/walk strategy went the way of the pear. 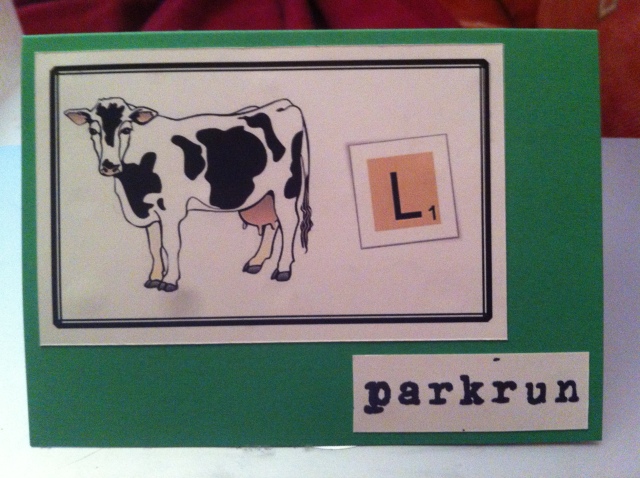 A Bradypus or Sloth am I, I live a life of ease, contented not to do or die but idle as I please; ... [Michael Flanders and Donald Swann]
View all posts by abradypus →
This entry was posted in parkrun and tagged cowell club, parkrun, Tonbridge parkrun. Bookmark the permalink.

30 Responses to Tonbridge parkrun … at which I finally earned my place in the Cowell Club.