Hmmm.  I have a cross country race at Lloyd Park on Saturday afternoon.  There’s a parkrun at Lloyd Park.  Rushmoor parkrun it is.

What can I say?  I’m a tourist at heart.

I arrived suitably early and sat in my car staring out at the rain and hoping that the parkrun weather fairies were on their way.  They were… but they were stuck in traffic and running about 15 minutes late.  Undaunted, I dug out my waterproofs and headed towards the start.

Unusually for me, I didn’t recognise anyone there.  One of the odd things about parkrun tourism is quite how often you bump into people you know.  After running into Drew and Claire at Tring, Jonathan at Fulham Palace, Ruth at Bath Skyline, Charles at Beeston and Paul at Marple, I was probably due an off week, and this was it.  Fortunately the regulars are a chatty bunch, which saved me from standing around feeling sorry for myself.

With Rushmoor parkrun done and dusted, I popped back home to pick up my Garmin (which I’d forgotten) and to change into dry socks (which I’d also neglected to pack) and then headed off to Lloyd Park.

Where I saw parkrunning friends galore.

The cross country race consisted of two 4km laps (three for the men) of almost pure, unadulterated mud.  It was a course made for spikes, which is unfortunate, as I don’t actually own any, and failing spikes you’d be well advised to opt for the grippiest, luggiest, trailiest trail shoes that you own.  Which was also unfortunate, as I wanted to test out a pair of mild trail shoes that I’m thinking of wearing for Country to Capital in a fortnight.

Fortunately, it was the Surrey Championships rather than a league match, so it was more about individual glory than teamwork.  And despite the fact that the running gods seem to have decreed that those runners with no chances of being showered with individual glory should instead be liberally coated with mud by way of a face plant in a puddle, it was fabulous. 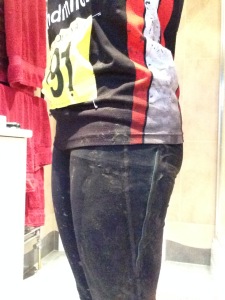 A Bradypus or Sloth am I, I live a life of ease, contented not to do or die but idle as I please; ... [Michael Flanders and Donald Swann]
View all posts by abradypus →
This entry was posted in janathon, parkrun, running and tagged cross country, mud, parkrun tourism, rushmoor parkrun, wimbledon windmilers. Bookmark the permalink.